Reckoning with History is Very Different from Erasing History

Throughout history, religious-political regimes have frequently tried to erase conquered rivals from history. Jumping from era to era, and citing just a few examples:

A few years ago, by invitation, I participated in a community committee called by the Tulsa Public School Superintendent, Dr. Deborah Gist. The charge of the committee was to research the names of all TPS schools, about 100 if I remember correctly. The issue of naming was alive in the Tulsa community and the nation.

Several buildings were named for individuals who owned enslaved persons. Many honorees expressed bigoted opinions about people of color. After some training in equity, diversity, and inclusion, and with the guidance of facilitators and historians, the committee dug into the historical records and wrote up short summaries of what we found. We were not tasked with recommending changes to the Board of Education; simply, do the research. We learned about how other institutions had handled the matter of naming (such as Yale University). As a group exercise, we deliberated and debated the values embedded in building names and the reasons for re-naming buildings.

Overall, this was a good exercise, both as a group and for me personally. The exercise was organized, thoughtful, honest, sometimes painful and difficult, and enlightening. I spent about two full days in the public library looking through Tulsa newspapers searching for information on the founding of the schools to which I was assigned. There was relatively little in the papers or in Board of Education minutes regarding why a particular name was chosen—with one exception (see below).

In addition to newspapers, research also included perusing scholarly articles and encyclopedia entries about names such as Patrick Henry, Walt Whitman, and Christopher Columbus. It was not hard to find that Henry owned scores of persons, knew slavery was wrong, but could not imagine how he could live without them! Whitman’s statements on race were sometimes bigoted. And Mr. Columbus: while some historians still claim he was heroic, more argue he was a lousy human being.

Robert E. Lee was not on my list of schools, but we all learned the purpose of that school’s naming, clearly stated in the historical record: the choice of names was a Jim Crow era expression of white supremacy meant to honor both the man who led the Confederacy’s rebellion and to keep alive the Lost Cause for which they fought.

At the end of the process, I said to the group: “Almost all the schools in TPS were built prior to the early 1970s. They were named by all white or nearly all white officials, and schools were largely segregated still in the late 1960s. School naming seemed based on a desire to honor local philanthropists and educators, some number of national figures, and a few persons of color deemed acceptable to white majorities (no Malcolm X school in Tulsa). In fact, I’d say the whole naming scheme is built on white supremacy, most evident by the fact that white people almost exclusively were in the position of power to choose the names.”

Now, the committee was doing our work while public schools were struggling mightily with being defunded. Teachers and staff were not paid a living wage. One teacher made national news by standing on street corner to beg for supplies.

Whom we choose to honor with a name on a building is important, and I would not want to walk into a building daily named for a person whose resume includes genocide or enslavement, but the whole enterprise of public school education in a place like Tulsa is a battle. And there is only so much attention and energy to be given to any project that may be really important but not urgent.

Well, in the end, the Board of Education received our report. Several school names were targeted for change, including Lee. Although renaming that school presented the clearest evidence the school was named to strengthen white supremacy, Lee parents and alums pushed back hardest. They had already renamed Robert E. Lee School in their heads as just “Lee.” I was really disappointed that the clearest moral example of why a name should be changed evoked the most controversy. It is important to note that the larger community did not have the opportunity to engage in a learning process as the committee did. Therefore, one could anticipate a-historical, gut-based responses.

On a national basis, we are faced with the responsibility to learn history and check our gut reactions. We in the U.S. are not at a moment of reckoning; we inhabit an era of reckoning.

I am no fan of mobs of persons pulling down monuments or defacing public architecture, both because a mob is an immoral form of democracy and because the public is deprived of a deliberative or educational process. But there will be a reckoning with our whitewashed history through which the bloodstains are, well, bleeding.

We should be reckoning with names and public honoring of names and causes. Changing a name is NOT erasing history in the same way that redecorating a pagan temple and calling it a Christian basilica or carving the heads of four presidents into a mountain sacred to indigenous peoples WERE efforts to erase history. 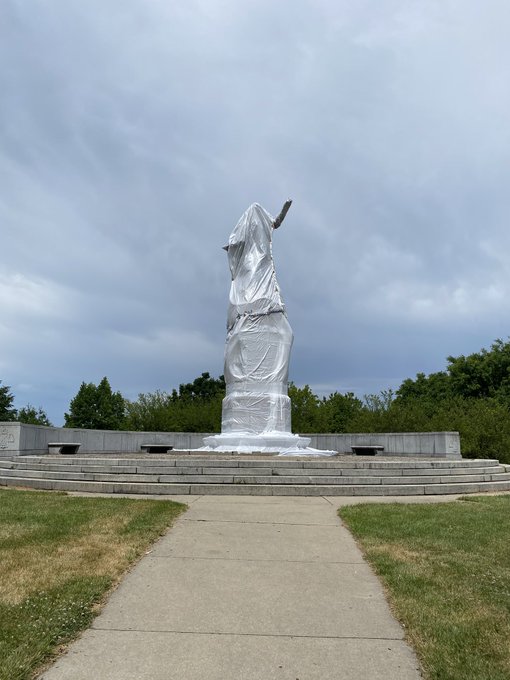 Reckoning is not erasing. It is learning the history that was previously suppressed. Columbus Day was created in the 1930s as a way to honor Italian culture and accepting us (my grandparents were immigrants) in the nation that called us vile names and which had recently shut its doors to more of us immigrating (the 1924 immigration act). But Columbus was greedy and genocidal, facts that were left out of history books from my era. I don’t want him representing me, and his statues don’t deserve public spaces. (I’d love for another figure to represent the contributions of Italians to American culture, maybe someone more like A. P. Giannini.)

The Lost Cause of the Confederacy bleeds from every building and statue and public depiction of their heroes. That “Cause” represents a dishonest, immoral, eclipse of history by a myth that perpetuates the Civil War, which may have been won by the North but from which we as a nation have never really freed ourselves.

Until the latter part of the 20th century, Christianity in the West has been the consummate iconoclast, with Protestants arguably trumping Catholics in our desire and ability to erase other cultures. Learning suppressed histories, including suppressed histories in how we see ourselves, reckoning with the more inclusive history, and then extending reckoning to the naming of art and place, and re-considering whom we honor and why—all this is not erasure or iconoclasm. These actions could be preludes to more compassionate, inclusive, just democracy.