What if Christians Hid Our Symbols from Public Life? 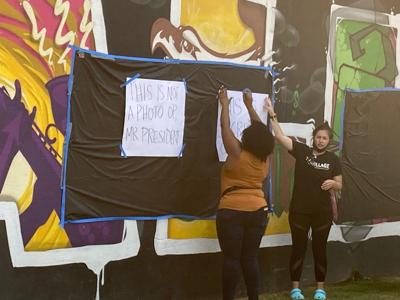 Residents cover portions of the Black Wall Street mural with messages, saying it is on sacred ground and an inappropriate place for a political photo op. KENDRICK MARSHALL/Tulsa World

Leaders in Tulsa’s Black community used what I thought was a brilliant strategy during the president’s campaign rally. They did not think it was fitting for visiting dignitaries to appropriate markers such as the Black Wall Street mural or memorial monument as photo ops.

Greenwood’s leaders tarped the monument and papered over the mural. They judged they were protecting sacred sites from persons who might want to use them for their own purposes. The result: no photo ops.

That strategy prompted me to think more about how to protect Christianity’s sacred symbols from being misappropriated in public life.

Yes, I know. That train left the station LONG ago, and too many Christian leaders have, in fact, freely given over our symbols to the state, in exchange for policy favors and cultural privilege.

Although the exchange of symbols for power is about 17 centuries old, there are still cringy moments where that exchange turns stomachs. Akin to the way he awkwardly hugged the American flag, the president held up the Bible like a fly swatter in front of St. John’s Church. I would judge these acts as cringy, or worse, even if the president was named Lincoln.

So, I’ll proceed with my thought experiment. What would happen if Christians tarped our symbols from public use—and abuse—for at least a year?

It does not take a PhD to understand that the U.S. has reached a critical crossroads moment in our history. Will the nation’s myth (its deeply rooted story, regardless of the historical veracity of that story) continue to be used in the service of white Christian dominance with “liberty for all” used as a carrot? Or will the myth either morph into or be replaced by a myth that lays the foundation for a multicultural democracy? Or will the republic collapse into the black hole that democracy’s 18th century critics warned it would: into an authoritarian, illiberal state?

The matter of which narrative we U.S. Americans use to frame ourselves—and which symbols, rituals, and moral principles re-enact that narrative in public life—is critical. The choice means life or death, both for ways of living as well as for who lives, who dies, who lives well, and who struggles to survive.

How could we Christians keep our symbols from being abused, misused, or misappropriated in public life?

Here is the exercise in imagination. What if Christian leaders consistently, publicly, respectfully, and yet loudly made demands and took actions such as:

(I’m sure I’ve left out some juicy examples. And there is a whole other set of works of religion-rooted compassion that I’m not including in this thought exercise because they are in a different category.)

Just thinking about this exercise should call this truth to our attention: many Christian denominations in the U.S. traded control over the meaning of our symbols for cultural influence and political power. Even in some progressive communities, I hear a hankering for a return to the days of Christian cultural dominance, when youth sports and movies did not compete with church. But there are particularly fraught moments when we Christians ought to be asking ourselves about the meaning-power exchange. Like now.

The exercise of withdrawing Christian stories and symbols from culture raises a host of questions about how religion is used to justify and even whitewash base motivations and behavior. Jonathan Haidt uses the images of an elephant to represent what our minds often want to do, and a rider as the reasoning part of the mind that justifies what the elephant wanted to do, that rationalizes where the elephant wanted to go. Religion often functions like the rider on a culture’s elephant.

Greed—which one can see in lands stolen, persons enslaved, nature despoiled, and wealth inequality— has been the elephant in American culture. Christianity has been the rider. Time to get off the elephant, which is only soiling our name. No photo ops. No dressing up self-interest or discrimination or violence in Christian clothing, using “Look it up! God said it, I’m only reporting it!” to justify punishment. No “buy expensive gifts to show you love them” when the foundational reasons for buying are to keep the economy going, or because we are selling diamonds that make a lot of money for the seller.

If we Christians could withdraw our symbols from public life, could figuratively tarp over them temporarily, what would be revealed—both in our witness and in the nation? Maybe more than we’d like to see and know.