In the first theology class I took in seminary, near the start of the course, the professor, lecturing on the Apostle Paul, said: “Christ sets us free. But there is freedom from and freedom for. Protestant Christian theology claims that, in some significant way, Christians are freed from the power of sin. But what are Christians freed for?”

A Unitarian-Universalist minister mused how difficult it is to create a positive UU identity, “Most of the people in this congregation come from other religious traditions. They pushed away from something, from a form of religion they found oppressive. But many of them don’t really know what they’ve embraced.”

I wish I had ten bucks for every time I’ve heard either a United Methodist or a Christian Church (Disciples of Christ) layperson say, “What I like about this church is no one tells you what to think. You can think whatever you want.”

In the U.S. today, we are seeing a frightful abundance of negative freedom play out in public life. That pushing off, pushing away, leave-me-alone, you-can’t-tell-me-what-to-do freedom is killing us. 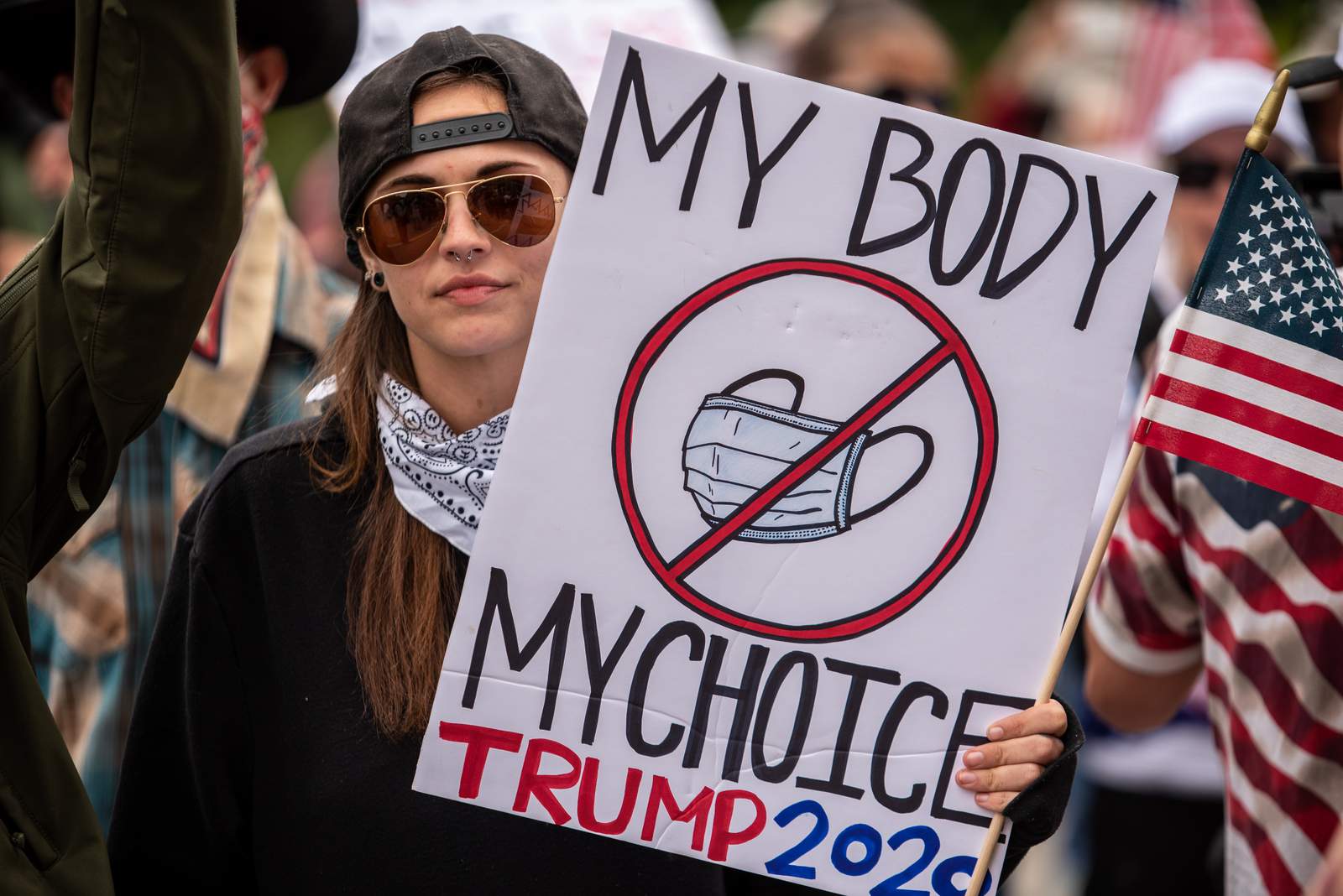 AUSTIN, TX – APRIL 18: A protester holds up a sign protesting wearing a mask at the Texas State Capital building on April 18, 2020 in Austin, Texas. The protest was organized by Infowars host Owen Shroyer who is joining other protesters across the country in taking to the streets to call for the country to be opened up despite the risk of the COVID-19. (Photo by Sergio Flores/Getty Images) (2020 Getty Images)

This idiotic controversy about mask wearing is the most prominent current example of death-dealing negative freedom. In using the word “idiotic,” I have Aristotle in mind: the human being is a political being, meaning a relational person, related to the polis, a collective or community greater than oneself. An idiot is one who stands apart from the polis, who claims to be a law unto oneself.

Mask wearing, according to negative freedom claimants, is: unnecessary because the novel corona virus is no worse than the flu; unnecessary because everyone is going to die of something; state oppression in the form of a muzzle; part of a Democratic plot to undermine the president.

All of these claims miss the central point about mask wearing. It is an action that protects other people more than oneself. It is an action that signals, besides compliance with the law in many places, “I know I am a member of a community, of a society, and I have a responsibility to manage my own behavior in order that I do not inflict harm on others. I wear a mask because, should I be infected but pre-symptomatic, my breath will not be the cause of someone else becoming ill, or worse.”

The ongoing experiment of the United States of America is whether or not we, as a people, can corporately and individually govern ourselves, take responsibility for ourselves and embrace our responsibilities for others sufficiently to keep the state as small as possible, and maximize positive freedom (the pursuit of happiness).

A successful experiment would mean our corporate pursuit of happiness, of virtuous living (Jefferson may have reflected Aristotle’s understanding of happiness as a life consistently lived according to virtue—and, yes, I know about the contradictions regarding virtue in his life), included a critical common good, a robust embrace by individuals of their responsibilities for themselves and their neighbors, and corporate responsibilities premised upon an ethic of “do no harm.”

How is the U.S. American experiment going as measured by that yardstick?

Just one example from corporate America. In fossil fuel rich states such as Oklahoma, who pays for the long-term costs of fossil fuel energy extraction, refinement, and usage? Is it the corporations which frack, extract, and refine? Is it those of us who pay relatively little for a product which demonstrably has degraded the entire biosphere of the planet? The answer in both cases is “no.”

Contrast U.S. America’s negative freedom/low responsibility examples with the Haudenosaunee Confederacy, sometimes known as the Iroquois Confederacy—which is a thing of the present and not only the past. Faithkeeper Oren Lyons said:

The Peacemaker taught us about the Seven Generations. He said, when you sit in council for the welfare of the people, you must not think of yourself or of your family, not even of your generation. He said, make your decisions on behalf of the seven generations coming, so that they may enjoy what you have today.

Judged by a Seven Generation yardstick, U.S. American society is choking on the practices of negative freedom.

The refusal to mask is but one deadly symptom of the larger issue. Until we, the people of the U.S., learn to exercise positive freedom in a manner that maximizes the practices of taking personal and corporate responsibility, along with pursuits of personal and corporate happiness, we and our descendants will suffer the severe consequences of too much “freedom from” and way too little “freedom for.”