When We Take Off the Masks

On Easter Sunday morning, shortly before sunrise, I attended an in-person worship service for the first time since the March 2020 shutdown. The service was outside. Everyone masked. It was lovely to be around people I’d not seen in a year, except on Zoom.

During the service, an imaginary scene briefly passed through my mind. The scene was of unmasking. I imagined what it would be like, being in a group of people I care about and who care about me, who together are told, “Okay, face each other. You may unmask now.” In slow motion, we each reach up, gently pull those blasted straps off our ears, and behold the face of another.” I felt a fleeting surge of joy as I imagined the unfolding of a group unmasking.

Maybe because it was Easter morning, and in the recesses of my memory, I remember lighting the first fire of Easter at a midnight vigil—light unmasking darkness. Or the time when my boss took me to an Easter vigil in an Episcopal Church where the triptych was shut all during Lent, and at midnight it was opened with a joyous pealing of bells and everything the pipe organ could give. Joy unmasking grief.

It is not time to unmask yet in public settings, but what a joy it will be when that time arrives. 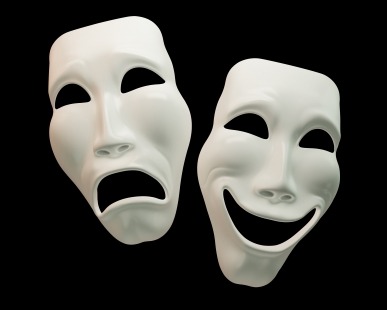 Then masks can go back to their normal uses. Protection from dangerously cold weather. Hiding faces during social justice protests from ubiquitous surveillance technology. Having fun, whether for Halloween, Mardi Gras, or on “The Masked Singer.” As a personal protective measure during surgery, or to filter out noxious odors and allergens. And, of course, to conceal one’s identity during the commission of a crime or to hide something from the public’s view.

During my college and seminary years, we talked about masks a lot: the masks we wear in public. The masks with which we hide our “true selves,” including how we hide ourselves from ourselves. The masks that shape our faces, strapped on us by parents, social norms, formative (including traumatic) experiences.

By today’s psychological theories about the self, we in the 1970s were quite naïve. We presumed the possibility of a stable self, of a core self, rather than “masks all the way down,” which is a simplistic way of portraying some contemporary theories. Take off one mask, there is another underneath.

I continue to believe—yes, perhaps naively—that there is a self that is not simply layers of masks. A responsible self. A self that can, more or less, be known and to which we each can be held accountable. To paraphrase Maya’s Angelou’s famous, provocative words, which don’t make sense without some kind of self, “when someone shows you who they are—with or sans mask—believe them.”

In our nation, haven’t we been talking, arguing, voting, and fighting over what “when someone shows you who they are” means? One effort at masking or unmasking ensconces the norm of a white, Christian national identity. A counter effort is to mask or unmask that narrative and deal with the racism underneath. In a bygone era, doctors and rugged cowboys promoted the health value of smoking, a value now (mostly) unmasked. On a recent episode of “Last Week Tonight” (HBO), John Oliver profiled/unmasked how the plastics industry touts the virtue of recycling plastic by masking how little is or can be recycled and how much plastic each of us eats in our food (about a credit card per week).

Don’t you long to see the matters unmasked for which we, individually and collectively, are responsible, especially when you suspect or know that a promoter, pastor, or politician is manipulating you through the use of a mask? Can you imagine hearing these statements: “Oil is a tremendous source of energy per ounce—but has to be replaced for the sake of sustaining life on the planet.” “If everyone votes, my party will have to move left/move right or we’ll never be elected again.” “When you want great tastes and don’t care about the calorie or sodium counts, eat here!”

Our current reality—or, rather, what passes for a construction of reality—might be expressed in the classic line from A Few Good Men, “I want the truth!!” And the retort, “You can’t handle the truth!!!” Paraphrased, and changed into a question, “Can you handle the realities of a world where problems, possibilities, and people are unmasked? And why are we, the public, so often presented with a masked reality?”

It is not yet time on the pandemic calendar, instructs the CDC, to unmask in public places. But it is long past time to unmask in order to have any chance of addressing the moral and ethical issues facing our faith communities and our nation.

One can imagine, and hope.