Nearly everyone over a fairly young age has seen, in reruns or on YouTube, the TV comedy classic scene of Lucy and Ethel working on the candy boxing assembly line. Ethel and Lucy hide that they can’t keep up with the speed of the line. The supervisor then speeds up the line more. Lucy and Ethel stuff the candies into boxes, their mouths, hats, aprons, and dresses. Still, they are overwhelmed. Candy gone wild! But at least the overflow was candy.

Imagine the conveyor line as our social media feeds, and Lucy and Ethel are our brains. What is coming down that line, too fast, and how are our brains handling the content? 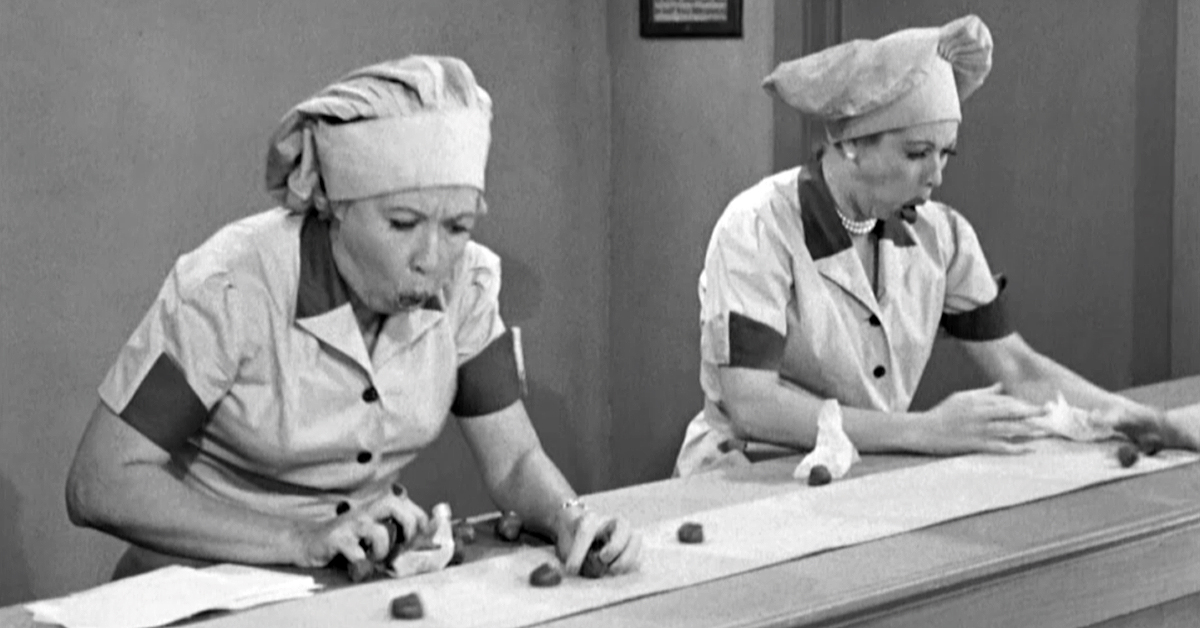 I use social media, some. I love connecting with geographically distant family, high school friends, seminary colleagues, former parishioners and co-workers, and many great church and community people I’ve been privileged to meet through my 23-year association with Phillips Seminary. But I also share the deep concern with many others regarding what social media—the speed and the algorithm-controlled content—are doing to our brains, our capacity for relationships, and our society.

Social media platforms are private, for-profit companies. Their business models serve their interests, and the needs and challenges of a multi-cultural nation struggling with democracy do not count. Neither are the interests of organizations devoted to an inclusive, tolerant, compassionate, socially-just version of the common good high on the companies’ concerns list. I read recently that only drug dealers and social media companies refer to their customers as “users.”

Algorithms are mathematical formulas that determine how data are treated. Social media algorithms sort potential posts in our data feeds and show us what they “think” we want to see. However, it is also the case that a programmer can program an algorithm to prefer posts with the most extreme emotional content, with content spreading our divides that will attract attention, clicks, shares, and emoticons. In fact, that is the case.

Anger—actually, outrage—is one of the emotions evoked and circulated through social media feeds on many political matters. Look no further than the election cycles since 2016 for overwhelming evidence of social media hitting our brain’s fear-and-anger center repeatedly, exhaustingly. Now, combine anger with fantastical stories, those that were once called “lies” but now named by some people “alternative facts.” Repeat the anger. Repeat the lie. Share. Pretty soon, you get teams searching for pedophile, cannibal Democrats and the claim that antifa stormed the Capitol disguised in MAGA hats.

To contradict Forrest Gump and to mash his line with Lucy and Ethel: on social media, life is not a box of chocolates. It is an inhumanly fast conveyor belt carrying both candy and legions of attractive toxins deceptively packaged as edibles.

You know the old newspaper truism, “If it bleeds, it leads”? Sensational, emotion-provoking headlines are not new. The lack of human filters and safeties vetting the content, the speed, and the customization of news feeds are new.

There is no economic incentive to set algorithms to highlight and feed stories of compassion, social justice, kindness, love, generosity, or perseverance in the face of suffering. In fact, because “news” so often means either the banal or some fear-inducing outrage, I’m sure revenues for any site would decline if they switched to a “good news,” “common good” format. But, goodness, we have to try to divert the energy from the toxins with which the social media conveyor belt is filling the world—and our brains.

I resonate with many lines from the letter in the New Testament attributed to James. The author employs creative, provocative images: wind-tossed minds, the wealthy shriveling in the sun or treasures rotting in the ground. Then, in short order, the author strings together conception, a bridled horse, a ship’s rudder, fire, and taming wild animals (chapter three). All these images are in service of the admonition to control one’s own tongue, to not “say evil things about each other” (4:11). I particularly like this verse:

Everyone is tempted by their own cravings; they are lured by them and enticed by them. Once those cravings conceive, they give birth to sin; and sin grow up, it gives birth to death. (1:14-15)

Now, the same verse with social media in place of “cravings”:

Everyone is tempted by their social media feeds. We are lured by them and enticed by them to click, to react, to share. Once you repeat the feed, anything in the feed born in fear and dehumanization gives birth to more of the same. Eventually, the births lead to death: dead compassion, dead kindness, dead love, dead tolerance, dead generosity.